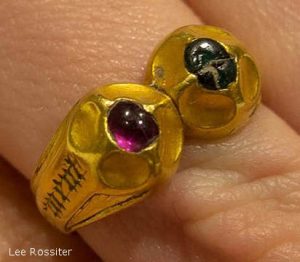 The rare Tudor ring, which has a ruby and an emerald in a flower-shaped form, was found by Lee Rossiter in Green Hammerton on 19 April last year.

Mr Rossiter only took up metal detecting 18 months before the discovery.

“When I first found the ring, I couldn’t believe my eyes,” he said.

“Until then I had only found the odd silver coin, but this looked like a proper piece of jewellery, which seemed to be made of gold.” MORE (bbc.co.uk) 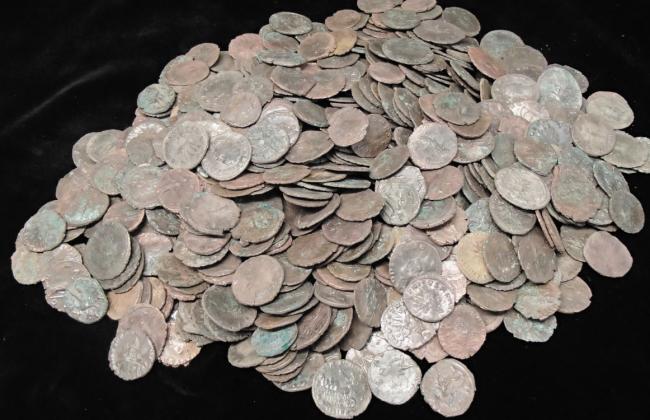 Ronald Lees and Rick Parker discovered 7,800 ancient Roman coins in a field in Cheshire. According to the British Museum’s Richard Abdy the hoard contains the following:

Edward Hargraves, accompanied by John Lister, found five specks of alluvial gold at Summerhill near Bathurst in February 1851. Then, in April 1851, John Lister and William Tom, trained by Edward Hargraves, found 120 grams of gold. This discovery, instigated by Hargraves, led directly to the beginning of the gold rush in New South Wales. This was the first gold rush in Australia and was in full operation by May 1851,[68] even before it was officially proclaimed on 14 May 1851,[42] with already an estimated 300 diggers in place by 15 May 1851.[69] Before 14 May 1851 gold was already flowing from Bathurst to Sydney,[70] an example being when Edward Austin[71] brought to Sydney a nugget of gold worth £35, which had been found in the Bathurst District.

In 1872 a large gold and quartz “Holtermann Nugget” discovered by the night shift in a mine part owned by Bernhardt Holtermann at Hill End, near Bathurst, New South Wales: the largest specimen of reef gold ever found, 1.5 meters (59 inches) long, weighing 286 kg (630 pounds), in Hill End, near Bathurst, and with an estimated gold content of 5000 ounces (57 kg). More Australian Gold History Click Here

Prospecting is the stuff of legend and fantasy, and plenty of people dream about finding the precious metal synonymous with wealth.

Gold prices are up around 15 per cent so far this year, making now a tempting time to have a crack at searching for gold.

But for some prospecting has become a way of life, regardless of the gold price.

Bill O’Connor, who has created a detailed website called Gold Prospecting in WA, has been prowling for gold since retiring from his job at Australia Post in 2005…

…Also you need a pickaxe, map, training and a $25 Miner’s Right — the type of licence required for gold prospecting, which is available from WA government agency, the Department of Mines and Petroleum (DMP)…MORE (Abc.net.au)

An amateur metal detector has made a discovery that experts think could change our understanding of Christianity in Denmark.

Dennis Fabricius Holm was enjoying an afternoon off work when he found a Birka crucifix pendant in a field near the town of Aunslev, Østfyn.

“I got off early on Friday, so I took just a few hours, I went around with my metal detector and then I came suddenly on something,” Mr Holm told DK.

“Since I cleared the mud and saw the jewellery, I have not been able to think of anything else.”…

…The dating of the crucifix, estimated at being from 900 – 950AD, is significant because it would indicate Danes embraced Christianity earlier than previously thought….MORE (Independent.co.uk)

Jan 10, 2016:This nugget took over an hour to dig and chisel out. It was 10″ deep in caliche. Caliche is a cemented conglomerate sort of rock very common in the desert SW.

The size and weight of the ring suggest that it was most likely worn by a man. It weighs over 32 grams and we know from X-ray fluorescence analysis at the British Museum that the metal is over 95% gold, the rest being silver and copper.

That’s fairly common for gold of this date, to be a good standard. Vikings were very concerned with the purity of the metal. On silver coins you sometimes find little nicks made with a knife blade where they were testing that they’d got decent quality silver.

It’s got a little bit of damage – probably hit by a plough or something in the thousand years that it’s been buried – but it’s our policy to preserve the ring as found and not try to restore it to ‘as new’ condition.

The ring was made by twisting two strands of gold wire and then twisting these with two tapering gold rods to form a hoop. The thin ends of the rods and wires were joined at the back of the hoop by beating them together into a flat, diamond-shaped plate. The plate is decorated with tiny punched circles…Read More (Culture24.org.uk)