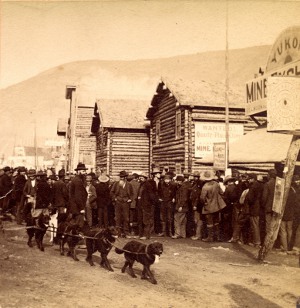 Planted in the ground on Aug. 17, 1896, today the Discovery Claim National Historic Site preserves the spot on Bonanza Creek, 15 kilometres from its confluence with the Klondike River, where George Carmack and his fishing buddies, Skookum Jim and Tagish Charlie established the first of their four claims.

According to the oral history traditions of the Tagish First Nations peoples, Jim, Charlie and Patsy Henderson were fishing with Jim’s sister, Shaaw Tla, and her husband, George Carmack when they were approached by a seasoned gold hunter, Robert Henderson. Following the unwritten code of the miner that any knowledge of potential finds must be shared, Henderson told Carmack of some promising prospects he’d discovered in the Klondike River Valley…>>MORE>(VancouverSun.com)