Executive Order 6102 is an Executive Order signed on April 5, 1933, by U.S. President Franklin D. Roosevelt “forbidding the Hoarding of Gold Coin, Gold Bullion, and Gold Certificates within the continental United States”. The order criminalized the possession of monetary gold by any individual, partnership, association or corporation

The order was rationalized on the grounds that hard times had caused “hoarding” of gold, stalling economic growth and making the depression worse. The New York Times, on April 6, 1933 p. 16, wrote under the headline “Hoarding of Gold”, “The Executive Order issued by the President yesterday amplifies and particularizes his earlier warnings against hoarding. On March 6, taking advantage of a wartime statute that had not been repealed, he issued Presidential Proclamation 2039 that forbade the hoarding ‘of gold or silver coin or bullion or currency,’ under penalty of $10,000 and/or up to five to ten years imprisonment.”

Effect of the order

Executive Order 6102 required all persons to deliver on or before May 1, 1933, all but a small amount of gold coin, gold bullion, and gold certificates owned by them to the Federal Reserve, in exchange for $20.67 (equivalent to $371.10 today) per troy ounce. Under the Trading With the Enemy Act of 1917, as amended by the recently passed Emergency Banking Act of March 9, 1933, violation of the order was punishable by fine up to $10,000 (equivalent to $180 thousand today) or up to ten years in prison, or both. Most citizens who owned large amounts of gold had it transferred to countries such as Switzerland.[citation needed]

Order 6102 specifically exempted “customary use in industry, profession or art”—a provision that covered artists, jewellers, dentists, and sign makers among others. The order further permitted any person to own up to $100 in gold coins (a face value equivalent to 5 troy ounces (160 g) of Gold valued at about $7800 as of 2011). The same paragraph also exempted “gold coins having recognized special value to collectors of rare and unusual coins.” This protected recognized gold coin collections from legal seizure and likely melting. 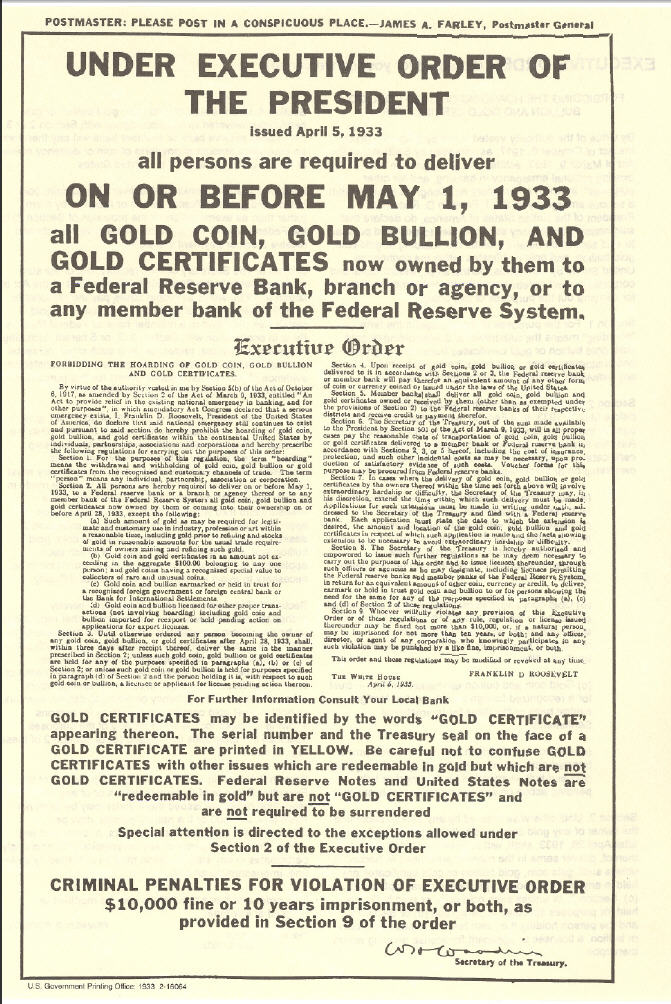 The price of gold from the Treasury for international transactions was thereafter raised to $35 an ounce ($587 in 2010 dollars) resulting in an immediate loss for everyone who had been forced to surrender their gold. The resulting profit that the government realized funded the Exchange Stabilization Fund established by the Gold Reserve Act in 1934.

Executive 6102 also led to the ultra-rarity of the 1933 Double Eagle gold coin. The order caused all gold coin production to cease and all 1933 minted coins to be destroyed. About 20 illegal coins were stolen, leading to a standing United States Secret Service warrant for arrest and confiscation of the coin. A legalized coin sold for over 7.5 million dollars, making it the most valuable coin in the world, almost double its nearest competition.

There was only one prosecution under the order, and in that case the order was ruled invalid by federal judge John M. Woolsey, on the grounds that the order was signed by the President, not the Secretary of the Treasury as required.

The circumstances of the case were that a New York attorney, Frederick Barber Campbell, had on deposit at Chase National over 5,000 troy ounces (160 kg) of gold. When Campbell attempted to withdraw the gold Chase refused and Campbell sued Chase. A federal prosecutor then indicted Campbell on the following day (September 27, 1933) for failing to surrender his gold. Ultimately, the prosecution of Campbell failed, but the authority of the federal government to seize gold was upheld, and Campbell’s gold was confiscated.

The case forced the Roosevelt administration to issue a new order under the signature of the Secretary of the Treasury, Henry Morgenthau, Jr., which was in force for a few months until the passage of the Gold Reserve Act on January 30, 1934.

The Gold Reserve Act of 1934 made gold clauses unenforceable, and changed the value of the dollar in gold from $20.67 to $35 per ounce. This price remained in effect until August 15, 1971, when President Richard Nixon announced that the United States would no longer convert dollars to gold at a fixed value, thus abandoning the gold standard for foreign exchange (see Nixon Shock).

The private ownership of gold certificates was legalized in 1964. They can be openly owned by collectors but are not redeemable in gold. The limitation on gold ownership in the U.S. was repealed after President Gerald Ford signed a bill to “permit United States citizens to purchase, hold, sell, or otherwise deal with gold in the United States or abroad” with an act of Congress codified in Pub.L. 93–373,which went into effect December 31, 1974. P.L. 93-373 did not repeal the Gold Repeal Joint Resolution, which made unlawful any contracts that specified payment in a fixed amount of money as gold or a fixed amount of gold. That is, contracts remained unenforceable if they used gold monetarily rather than as a commodity of trade. However, Act of Oct. 28, 1977, Pub. L. No. 95-147, § 4(c), 91 Stat. 1227, 1229 (originally codified at 31 U.S.C. § 463 note, recodified as amended at 31 U.S.C. § 5118(d)(2)) amended the 1933 Joint Resolution and made it clear that parties could again include so-called gold clauses in contracts formed after 1977.

The myth of a safe deposit box seizures order

According to a folk rumor on the internet, President Roosevelt ordered all the safe deposit boxes in the country seized and searched for gold by an I.R.S. official. A typical example reads:

By Executive Order Of The President of The United States, March 9, 1933.

By virtue of the authority vested in me by Section 5 (b) of the Act of October 6, 1917, as amended by Section 2 of the Act of March 9, 1933, in which Congress declared that a serious emergency exists, I as President, do declare that the national emergency still exists; that the continued private hoarding of gold and silver by subjects of the United States poses a grave threat to the peace, equal justice, and well-being of the United States; and that appropriate measures must be taken immediately to protect the interests of our people.

All safe deposit boxes in banks or financial institutions have been sealed, pending action in the due course of the law. All sales or purchases or movements of such gold and silver within the borders of the United States and its territories and all foreign exchange transactions or movements of such metals across the border are hereby prohibited.

Your possession of these proscribed metals and/or your maintenance of a safe deposit box to store them is known by the government from bank and insurance records. Therefore, be advised that your vault box must remain sealed, and may only be opened in the presence of an agent of the Internal Revenue Service.

By lawful order given this day, the President of the United States.
Franklin Roosevelt—March 9, 1933

Most of this text does not appear in the actual Executive Order. In fact, safe deposit boxes held by individuals were not forcibly searched or seized under the order and the few prosecutions that occurred in the 1930s for gold hoarding were executed under different statutes. One of the few such cases occurred in 1936, when a safe deposit box containing over 10,000 troy ounces (310 kg) of gold belonging to Zelik Josefowitz, who was not a U.S. citizen, was seized with a search warrant as part of a tax evasion prosecution.

Similar laws in other countries

In Australia part IV of the Banking Act 1959 allowed the Commonwealth government to seize private citizens’ gold in return for paper money where the Governor-General “is satisfied that it is expedient so to do, for the protection of the currency or of the public credit of the Commonwealth.” As of January 30, 1976, this part’s operation is “suspended”.

Text is available under the Creative Commons Attribution-ShareAlike License