Fiat money is money that derives its value from government regulation or law. The term fiat currency is used when the fiat money is used as the main currency of the country. The term derives from the Latin fiat (“let it be done”, “it shall be”)

Fiat money originated in 11th century China, and its use became widespread during the Yuan and Ming dynasties. During the 13th century, Marco Polo described the fiat money of the Yuan Dynasty in his book The Travels of Marco Polo. The Nixon Shock of 1971 ended the direct convertibility of the United States dollar to gold. Since then all reserve currencies have been fiat currencies, including the U.S. dollar and the Euro. 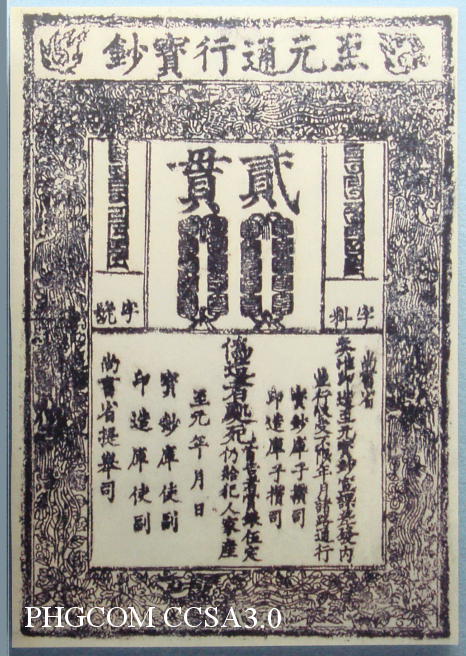 The term fiat money has been defined variously as:

While gold- or silver-backed representative money entails the legal requirement that the bank of issue redeem it in fixed weights of gold or silver, fiat money’s value is unrelated to the value of any physical quantity. Even a coin containing valuable metal may be considered fiat currency if its face value is higher than its market value as metal.

The Song Dynasty in China was the first to issue paper money, jiaozi, around the 10th century AD. Although the notes were valued at a certain exchange rate for gold, silver, or silk, conversion was never allowed in practice. The notes were initially to be redeemed after three years’ service, to be replaced by new notes for a 3% service charge, but, as more of them were printed without notes being retired, inflation became evident. The government made several attempts to support the paper by demanding taxes partly in currency and making other laws, but the damage had been done, and the notes fell out of favor.

The successive Yuan Dynasty was the first dynasty in China to use paper currency as the predominant circulating medium. The founder of the Yuan Dynasty, Kublai Khan, issued paper money known as Chao in his reign. The original notes during the Yuan Dynasty were restricted in area and duration as in the Song Dynasty.

All these pieces of paper are, issued with as much solemnity and authority as if they were of pure gold or silver… and indeed everybody takes them readily, for wheresoever a person may go throughout the Great Kaan’s dominions he shall find these pieces of paper current, and shall be able to transact all sales and purchases of goods by means of them just as well as if they were coins of pure gold.
—Marco Polo, The Travels of Marco Polo

During the 13th century, Marco Polo described the fiat money of the Yuan Dynasty in his book The Travels of Marco Polo. In 1661, Johan Palmstruch issued the first regular paper money in the West (although Washington Irving records an earlier emergency use of it, by the Spanish in a siege during the Conquest of Granada), under royal charter from the Kingdom of Sweden, through a new institution, the Bank of Stockholm. While this private paper currency was largely a failure, the Swedish parliament eventually took over the issue of paper money in that country. By 1745, its paper money was inconvertible to specie, but acceptance was mandated by the government. Fiat money also has other roots in 17th century Europe, having been introduced by the Bank of Amsterdam in 1683.

An early form of fiat currency in the American Colonies were “bills of credit”.[14] Provincial governments produced notes which were fiat currency, with the promise to allow holders to pay taxes in those notes. The notes were issued to pay current obligations and could be called by levying taxes at a later time.

Since the notes were denominated in the local unit of account, they were circulated from person to person in non-tax transactions. These types of notes were issued particularly in Pennsylvania, Virginia and Massachusetts. Such money was sold at a discount of silver, which the government would then spend, and would expire at a fixed point in time later.

Colonial powers consciously introduced fiat currencies backed by taxes, e.g. hut taxes or poll taxes, to mobilise economic resources in their new possessions, at least as a transitional arrangement. The repeated cycle of deflationary hard money, followed by inflationary paper money continued through much of the 18th and 19th centuries. Often nations would have dual currencies, with paper trading at some discount to specie backed money.

Examples include the “Continental” issued by the U.S. Congress before the Constitution; paper versus gold ducats in Napoleonic era Vienna, where paper often traded at 100:1 against gold; the South Sea Bubble, which produced bank notes not backed by sufficient reserves; and the Mississippi Company scheme of John Law.

During the American Civil War, the Federal Government issued United States Notes, a form of paper fiat currency popularly known as ‘greenbacks’. Their issue was limited by Congress just slightly over $340 million. During the 1870s, withdrawal of the notes from circulation was opposed by the United States Greenback Party. The term ‘fiat money’ was used in the resolutions of an 1878 party convention

By World War I most nations had a legalized government monopoly on bank notes and the legal tender status thereof. In theory, governments still promised to redeem notes in specie on demand. However, the costs of the war and the massive expansion afterward made governments suspend redemption in specie. Since there was no direct penalty for doing so, governments were not immediately responsible for the economic consequences of printing more money, which led to hyperinflation – for example in Weimar Germany.

Attempts were made to reassert currency stability by anchoring it to wholesale gold bullion rather than making it payable in specie. This money combined pure fiat currency, in that the currency was limited to central bank notes and token coins that were current only by government fiat, with a form of convertibility, via gold bullion exchange, or via exchange into US dollars which were convertible into gold bullion, under the 1945 Bretton Woods system.

From 1944 to 1971, the Bretton Woods agreement fixed the value of 35 United States dollars to one troy ounce of gold.

Other currencies were pegged to the U.S. dollar at fixed rates. The U.S. promised to redeem dollars in gold to other central banks. Trade imbalances were corrected by gold reserve exchanges or by loans from the International Monetary Fund. This system collapsed when the United States government ended the convertibility of the US dollar for gold in 1971, in what became known as the Nixon Shock.

Chartalism is a monetary theory that states the initial demand for a fiat currency is generated by its unique ability to extinguish tax liabilities. Goods and services are traded for fiat money due to the need to pay taxes in the money.

A fiat-money currency generally loses value once the issuing government or central bank refuses to further guarantee its value, but this need not necessarily occur. For example, the so-called Swiss dinar continued to retain value in Kurdish Iraq even after its legal tender status was withdrawn by its issuer, Iraq’s central government.

In monetary economics, fiat money is an intrinsically useless product, used as a means of payment. In some micro-founded models of money, fiat money is created internally in a community making feasible trades that would not otherwise be possible, either because producers and consumers may not anonymously write IOUs, or because of physical constraints.

Text is available under the Creative Commons Attribution-ShareAlike License
wikipedia.org/Fiat_money