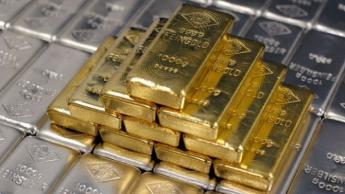 In the London gold fix, a reference price for gold is set twice each business day by five market-making members of The London Gold Market Fixing company.

The fix, as it is known, is widely used as a reference and benchmark price for settling contracts on a given day by players in the gold market and for gold derivatives contracts…

The five-market making members are Société Générale, Scotiabank, HSBC, Deutsche Bank and Barclays. Deutsche Bank announced in 2013 that it was placing its seat on the panel up for sale…

The London Gold Fixing company dates back almost one hundred years – the first recognizably modern gold fix was set (telephonically) on September 12, 1919 at 11:00 GMT. The price that day was £4.18s.9d. per fine ounce; the New York price of gold that day was $20.67 per ounce.

But the telephonic method was quickly dropped – the interested parties started to hold formal meetings at the offices of NM Rothschild in New Court, St Swithin’s Lane, London.