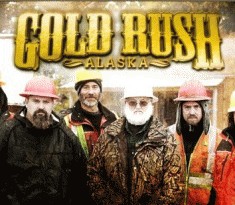 GOLD RUSH, Discovery Channel’s #1 series, is giving fans a look at the upcoming season, answering that all-important question: Who’s in and who’s out? Last season, things were tough all over in the Hoffman camp, while 18-year-old Parker Schnabel struck out into the world for the first time, and made it count.

Last season, GOLD RUSH fans watched as Todd Hoffman stuck his neck out and rolled the dice, taking his entire operation to the jungles of Guyana, South America, scheming to make a fortune along with his father Jack, Dave Turin, Jim Thurber and a few new additions to his crew. But, alas, things didn’t go quite as planned–as things often do not when it comes to Todd. Team Hoffman hit rock bottom, and ol’ Todd lost his land, most of his money, his crew and perhaps worst of all, his dignity. This season the big questions are (1) Will Todd be able to turn things around? or (2) Will he end up throwing in the towel for good?

While things were tough all over for Team Hoffman, then-18-year-old Parker Schnabel proved his worth in gold–over 1,000 ounces-worth, in fact, worth 1.4 million dollars. It was a tough time for the first-time Klondike boss, no doubt, but he learned a lot, from both his crew and his often cantankerous mentor, Tony Beets.  In Season 5, Parker hopes to take it up a notch with a goal of 2,000 ounces; will he reach his ambitious total? Or is he simply caught up in a raging case of gold fever?…MORE (TVRuckus.com)
Did you miss season 4: South America- Chilean Gold?