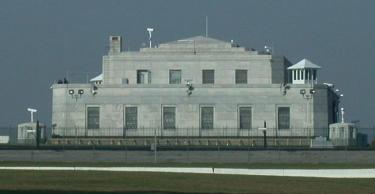 In 1950 the US owned about 20,000 metric tons of gold – approximately 640,000,000 troy ounces. By August 15, 1971 when President Nixon “temporarily” closed the “gold window” that hoard had decreased to about 8,100 tons (Fort Knox, the NY Fed, and other locations). The US government had been overspending, exporting dollars oversees, and other governments had “cashed in” those dollars for gold. At that rate of decrease, the US gold hoard would have been entirely dissipated by now. Perhaps it is gone!

President Nixon had a choice – default on the US promise to redeem dollars with gold, or reduce spending. Like any prominent politician he chose to continue spending and to blame the problem on someone else – the “international money speculators” but it might as well have been the Russians, Democrats, the French, Communists, an ethnic group, or the weather – anyone but those responsible – The President, Congress, and the bankers.

Forty three years later (since August 15, 1971) the “temporary” policy is still in place, the US government has officially redeemed no dollars for gold, and the US economy has deteriorated…

…The Federal Reserve has “printed” well over $3,000,000,000,000 since the financial crisis of 2008 – about ten times the current market value of all the gold that the US supposedly still has in its vaults. Global annual gold production is about 2,500 tons, about 80,000,000 ounces or about $105,000,000,000. One hundred five billion dollars in global gold production is produced through the considerable efforts of the global gold mining community. But the Fed chose to “crank up the printing presses” and effortlessly created over $3 Trillion in new digital dollars since 2008. The Fed has temporarily saved the banks, the US credit rating, the bond market, the S&P 500 Index, and the upper 1%, and will continue to do so for as long as they can sell the recovery story to manage the crisis…MORE (Safehaven.com)