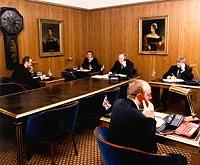 The operator of the London gold price benchmark said on Thursday it formally started the process to find a new administrator for the century-old mechanism that will halt the telephone call that four institutions enter twice a day in favour of an electronic solution.

The London Gold Market Fixing Ltd (LGMFL), along with the London Bullion Market Association (LBMA), said in a statement that the choice will be announced in October, and implementation will be complete by the end of 2014.

The price-setting process, also known as the fix, has been used by producers, consumers and investors to trade gold and value their shares since 1919…MORE (Reuters)