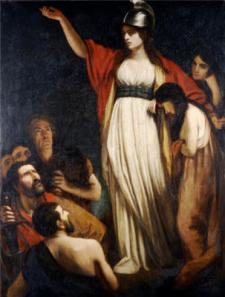 Today, the tale of the last moments of one of her victims — a rich noble woman — has been unearthed.

Boadicea led the assault on the Roman capital of Britain in about AD60. Her tribal followers — enraged by the humiliating beating of their queen and the rape of her daughters — vented their full fury on the occupants of the newly founded frontier city of Colchester.

The price they extracted from their Roman overlords was brutal.

As the savage tribesmen and women surged over the walls, one wealthy Roman woman hid her personal collection of jewellery. She hoped it would stay safe while she fled to the town’s temple for refuge…MORE (News.com.au)