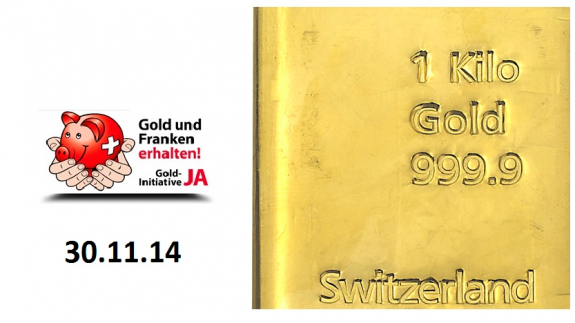 Mark O’Byrne: There are just 3 days left until the“Save Our Swiss Gold” referendum this Sunday. On November 30, voters in Switzerland will head to the polls to decide whether the Swiss National Bank (SNB) should back the Swiss franc with gold by increasing its gold holdings to 20% – up from current levels of 7%.

The conservative Swiss People’s party proposed the initiative, called “Save Our Swiss Gold”, with the intention of boosting the security and financial and monetary independence of Switzerland in these  times of financial uncertainty. They believe that a 20% gold holding will protect the Swiss people from currency debasement, currency devaluation and an international monetary crisis.

In the case of a “yes” vote, gold prices are likely to surge. Analysts do not believe a yes vote is possible. However, analysts have got the mood of the people wrong in many referendums both in Switzerland and throughout Europe in recent years.

We believe that the vote will be very close – much closer than many analysts suggest. After a massive, very well funded and highly coordinated campaign by the banking and political establishment in Switzerland, the polls show that the no side is in the lead…MORE (GoldCore.com)