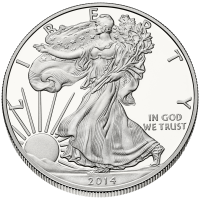 To add further perspective to the demand for Silver Bullion Coins, for the first 22 years of the American Eagle Silver Bullion Coin Program, the Mint typically sold between three million and 10 million ounces per year. Since 2007, sales have increased nearly five-fold from 9,887,000 in 2007 to more than 44 million last year…Read More (US MINT)