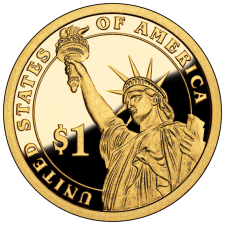 Keith Weiner Forbes.com August 18,2014
There is strong opposition to any proposal to end the Federal Reserve and move away from its paper dollar. The Fed has many ideological and, of course, crony supporters. So it’s interesting that there was little controversy in Oklahoma around removing one of the obstacles to the use of gold as money. Republican Mary Fallin, the governor of the Sooner State, signed into law legislation that recognizes gold and silver as money. There was bipartisan support, particularly in the state Senate.

Oklahoma doesn’t force anyone to accept gold or silver in payment. It simply exempts them from state sales tax. While sales tax on the metals was probably a minimal source of revenue for the government, it was certainly a major competitive disadvantage to bullion dealers. Price sensitive buyers simply shopped out of state.

Utah has a similar law, which also exempts the monetary metals from capital gains taxes, and Arizona has been trying to pass one. Capital gains tax on the metals is a roadblock preventing their circulation. Although the Oklahoma law is more modest, exempting only sales tax, it’s an important step towards the gold standard…MORE (Forbes.com)