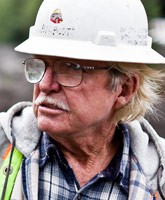 Questions and speculations on the participation of the Dakota Boys, Fred and Dustin Hurt, on GOLD RUSH this season have been swirling all summer. Discovery Channel has not officially said they would not be there, but they have announced two new pre-season specials, set to air next week, and neither appears to include anything about the Dakota Boys. Fred himself, however, posted in no uncertain terms the answer to the question on his Facebook page on July 28:  The Dakota Boys will not be on GOLD RUSH for the upcoming Season Five.

Fred’s biggest reason appeared to be money issues–lack of it–coming from Discovery Channel to him and his crew. His frustration and downright anger were clear in his Facebook post:

I am not rich…..I am a working class guy like most of you. After spending more for four years straight than I made, there was no way for me to continue.

But the main reason is simple……and I quote….”If you want a Miner, call me…….if you want an Actor, pay me like one.”

Dustin and I were “hard to work with”. Interpretation ?……we did not go along with every cocamainy idea the film people dreamed up……

Sssssooo……as we were the ‘Red Headed Stepchild’, we were on our own…….