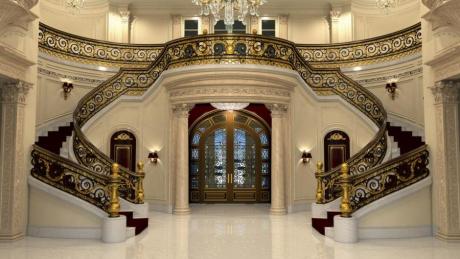 Forbes 9/04/2014: A 60,000-square-foot Beaux Arts mansion with a 22-carat gold-leaf entrance gate has just been listed for $139 million, making it the new most expensive home officially on the market in America. And the house is not even fully built.

Le Palais Royal, as the 11-bedroom, 17-bath new mega-mansion is being called, was the pet project of a very wealthy owner who has since decided to abandon his dream palace in order to travel the world on his yacht. The massive home lies on 4.4 acres on Millionaires Mile in Hillsboro Beach, Florida, halfway between Fort Lauderdale and Boca Raton. It’s still under construction, scheduled to be complete by the end of next year, says listing agent William P.D. Pierce of Coldwell Banker Residential Real Estate. He would not disclose the owner’s identity…MORE (Forbes)