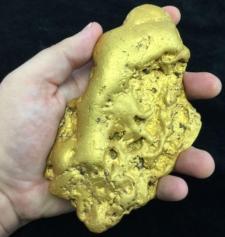 Kevin Fagan October 22, 2014: Here we go again — what is believed to be the biggest gold nugget found in modern times in California’s historic Gold Country is going on sale Thursday in San Francisco.

This 6.07-pound whopper is being sold by Tiburon coin dealer Don Kagin, the same dealer who is selling the $10 million worth of gold coins that made such a stir this year after they were found in a couple’s backyard in the Sierra.

The “Butte Nugget,” so named because it was found by a gold hunter in the Butte County mountains, will be unveiled at the prestigious San Francisco Fall Antiques Show. The show opens Thursday at Fort Mason.

The owner of the nugget asked Kagin to keep his name and the location of the find secret, a standard practice for anyone afraid of being swarmed by treasure-seekers and thugs. Kagin’s staff is still assessing the worth of the nugget and expects it to carry a price tag of $350,000 or more…MORE (SF GATE.com)