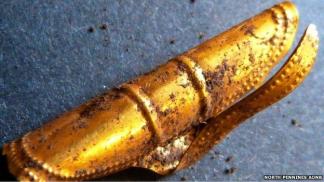 BBC 4 August 2014: A group of schoolboys has unearthed a rare 4,000-year-old ornament during a dig in Northumberland.

The children, from Alston Primary School in Cumbria, were taking part in an excavation at Kirkhaugh when they saw a glint of gold in the soil.

The object, which was found in a burial mound, is believed to be a decorated hair tress from about 2,300 BC…MORE (BBC)